Halloween is coming! And with it, several unique opportunities to demonstrate your love of wildlife and wild places. But what could a holiday built around costumes, candy, and spooky fun have to do with conservation? As it turns out, quite a bit. Remember “The Three R’s”? I hope so. The three R’s are Reduce, Reuse, and Recycle, and Halloween is a great time to showcase them all! We can Reuse old clothes, craft supplies, and other odds and ends to make costumes. Doing so helps us avoid buying cheap, single-use costumes that go straight to the landfill on the first of November. Recycling is also great. Paper, plastic, and glass make up the majority of our Halloween decorations and costume pieces. One of the most important things we can do on Halloween, however, is Reduce. In particular, we can reduce our consumption of Palm Oil. 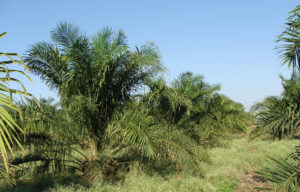 What Is Palm Oil?

Palm oil is a vegetable oil, similar to canola, coconut, sesame, or any other variety you may find in your pantry. It’s derived from the small red fruit of a specific type of tree (called, not-very-creatively, the oil palm). While there’s nothing inherently wrong with palm oil or oil palms, they’re at the center of one of the most catastrophic ecological disasters of our time.

Vegetable oils are incredibly useful. While we use many types in cooking, palm oil uses go far beyond the frying pan. Palm oil turns up in thousands, of everyday products and foods are only the beginning. Palm oil helps your bar of soap to lather. It helps your lipstick to hold color and resist melting. We add it to shampoo to help replace the natural oils stripped away in washing. It’s in your ice cream, your pizza crust, your bread and pastries. Palm oil is a major component in biodiesel. Especially relevant this time of year, palm oil is in your candy. Palm oil is everywhere. In fact, according to the World Wildlife Fund (WWF), when you walk into the supermarket, palm oil is an ingredient in half of what you see on the shelves.

Too Much of a Good Thing

As you can see, palm oil is an incredibly desirable product, and recently, it’s grown even more popular. Increased public awareness of unhealthy or environmentally destructive products has lead to market shifts. In the last decade, the public has soured on both petroleum-based fuels and trans fats. In both of these cases, as these products have declined, palm oil has stepped up. The greater emphasis on replacing petroleum products with biofuels has led to a huge increase in the production of biodiesel. Biodiesel production relies on vegetable oils of which palm oil is generally the cheapest and most efficient to produce. In a similar fashion, producers eager to remove trans fats from their foods have discovered that palm oil makes for a fine substitute.

The world craves palm oil and more than a few nations have been eager to fulfill the demand. Oil palms grow wonderfully in the tropics and have become popular cash crops throughout much of southeast Asia. Malaysia and Indonesia, in particular, have embraced this particular cash crop and compete for the crown of world’s foremost producer.

Oil palms thrive in areas that naturally support rainforests. As a matter of course, these wild areas of rich biologically diversity must give way to carefully organized palm plantations. By far the easiest—and most destructive—way to prepare an area for cultivation is with a technique called “slash and burn”. This simple and ancient agricultural technique dates back to Paleolithic man. Basically, you go in and cut down everything growing where you want your plantation to be. This means driving away or killing any wildlife present and clear-cutting an area of land. Once the slashing is complete, you set the debris on fire. This serves to clear the mess and provides a boost of nutrition to the underlying soil.

Cultures throughout history and around the world have used fire in this fashion. Unfortunately, the practice is only truly viable when practiced on a small scale in areas of low human population density. The burnt material provides only a short-term boost in soil nutrition. The first harvest generally consumes this resource, leaving the soil in a degraded state. Historically, after such a harvest, farmers abandoned or left fallow the burned areas for a time so that the soil might recover. Such practices are difficult, if not impossible, to follow when farming on an industrial scale. 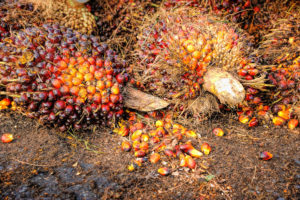 Tropical soils tend to be rather poor to begin which makes slash and burn in those regions even more destructive. Acreage deforested in this way quickly loses viability and plants—farmed or wild— have a hard time reestablishing in the brutalized soil. As a result, the palm orchards don’t thrive for long and must soon be replaced with fresh tracts of rainforested land. Between the increasing demand for the oil and unsustainable practices used in producing it, deforestation in the tropics rages at a cataclysmic rate. To date, this industry has deforested an area over twice the size of Belgium!

The damage to the ecosystem doesn’t end with the plants. These practices kill wild animals as well. Critically Endangered species like Sumatran rhinos, Sumatran tigers, and orangutans cling to existence and each acre of habitat lost reduces their chances of survival. Heavy equipment and raging fires kill some. The survivors often return to the plantations because with less natural habitat to forage in, the plantations provide the only reliable source of food. This behavior transforms the animals from wild neighbors to damaging agricultural pests. Whether spraying for aphids or shooting at orangutans, no farmer can long tolerate pests in their fields.

Luckily, all is not lost. Already, many of the world’s largest commercial consumers of palm oil are making changes. Unilever for example (owner of such brands as Dove, Ben & Jerry’s, Axe, and Lipton) played a large role in establishing the Round Table for Sustainable Palm Oil (RSPO) in 2004. The RSPO brought together producers, consumers, regulators, and conservation agencies to work on improving practices. They also developed a certification program not unlike those used to certify organic products. If a palm oil supplier is RSPO certified, it means that no primary forest or areas with significant concentrations of biodiversity, or fragile ecosystems were cleared for the oil palms. It also means that the use of pesticides or slash and burn practices has been limited and that fair labor standards are in place for workers.

The RSPO and certification are great first steps, but they are far from being the final steps needed. History has shown us again and again, that political will and regulation are weak tools to affect the kinds of changes needed. After all, the RSPO itself came about, not because of a legislative act, but because of public pressure on the international corporations most reliant on palm oil. This pressure must be ongoing if we want to protect the severely endangered species and ecosystems threatened by palm oil production.

To provide this pressure, you can join a protest and write letters or social media posts to these companies and producers. In fact, it’s never been easier to do so. You can also effectively “vote with your pocketbook”. If there’s one thing businesses pay attention to, it’s the bottom line. By refusing to purchase products containing unsustainably produced palm oil, you send a strong message.

There are several easy ways to determine whether or not the soap, or margarine, or lip balm in your shopping cart contains sustainably produced palm oil. Perhaps the easiest is to download an app built by our friends at the Cheyenne Mountain Zoo in Colorado. This app allows you to scan barcodes in real-time to determine whether the product contains palm oil and how that oil was sourced. It’s a phenomenal, easy to use, and free tool that has already helped make a difference in the lives of the people (and rhinos, and tigers, and orangutans) or Malaysia and Indonesia.

There’s no better time than now to get involved in this fight. After all, nearly all candy contains some form of palm oil and Halloween is the candy industry’s biggest event. When you’re stocking up this year, take a moment to question what winds up in your cart. There are several guides out there to RSPO certified or orangutan friendly products. In fact, you can find one of them here. When we’re not paying attention, that’s when things get ugly. Deforestation, exploding CO2 emissions, the rapid decline of species like the Sumatran rhino and the orangutan, all of these crises and more can only happen while the world looks the other way. This Halloween, let’s show these species and their habitat that we care by paying attention to the true cost of that candy bar and making a better choice for the future.