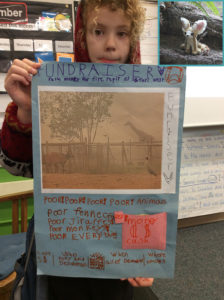 Our mission, here at Safari West, is to introduce our guests to the wonders of wildlife. We want to entertain the curious crowds that come through our gates, but more than that, we want to educate them. It is our fervent hope that our work will help inspire and nurture a new generation of conservation advocates.

Some months back, we welcomed the Road Scholars to our wildlife preserve. We’ve worked with this amazing program for years and every summer we host groups of grandparents and grandchildren who come to stay a while and explore our world. This last summer, the group included an an inspiring young man named Desmond.

Desmond and the Fennec Fox

During the walking portion of our safari tours, we inevitably encounter the fennec fox. Fennecs are incredible creatures; the smallest of canids, a desert animal that thrives throughout the Sahara region. Tiny, and sporting enormous ears, these foxes inspire coos of adoration from all who see them. As it turns out, they worked their magic on Desmond as well.

Following his time with us, Desmond returned home and began to teach his friends, family members, and classmates about the desert foxes he’d met as Safari West. His toy fennec fox (appropriately named Foxy) became the class mascot. And when the Tubbs fire broke out and forced the evacuation of Safari West, Desmond became our unofficial representative, scouring our newsfeeds and keeping his class up to date with the latest.

Desmond’s turned his fascination into action a short time later when a class assignment had him designing a poster for an event. Desmond wanted his work to help us and our animals recover from the fire. He created a poster outlining the status of Safari West and including an envelope for collecting donations.

From there, his work went viral. He collected $12 from his caring classmates before his teacher had the notion of pushing the campaign in the class newsletter. At the same time, Desmond’s family started an email campaign and helped him set up a Fundly page to encourage digital donations as well.

A HUGE Thank you to Desmond

By the time Desmond’s family got in contact with us, he had raised over $500!  This incredible and generous donation was humbly accepted by the Safari West Wildlife Foundation. As the Foundation’s mission centers entirely on youth education and wildlife conservation, they couldn’t be more excited to learn about Desmond.

This world needs people like Desmond more than ever. Our animals’ wild counterparts deal with a drastically changing environment and more humans every year. As we move into the future, it’s profoundly inspiring to know that we have people like Desmond growing up to become the leaders we’ll need.

Thank you for getting 2018 off to an inspiring start Desmond. We cannot wait to see you again.